The New Normal: When a Child’s Unexpected Diagnosis Changes Everything

(FARMINGTON, MO – September 2, 2021) – According to the Centers for Disease Control (CDC), more than 100 million adults in the United States are living with diabetes (including type 1 and 2) or pre-diabetes; however, many don’t even realize they have the condition. This is worrisome because if left untreated, diabetes can quickly become life-threatening.

What is Diabetes?
Diabetes is a group of disorders that cause elevated blood sugar (glucose) levels in the body. Glucose is a critical source of energy for the brain, muscles, and tissues.

“When you eat, your body breaks down carbohydrates into glucose, which triggers the pancreas to release a hormone called insulin that allows glucose to enter the cells from the blood,” said Karin Clauss, MD, a pediatrician at Parkland Health Center (PHC). “If your body doesn’t produce enough insulin to effectively manage glucose, it can’t function or perform properly creating diabetic symptoms.”

There are four types of diabetes: type 1, type 2, pre-diabetes, and gestational diabetes.

Previously known as juvenile diabetes, type 1 diabetes is caused by an insulin deficiency and is usually diagnosed in childhood. According to the American Diabetes Association (ADA), nearly 1.6 million Americans have type 1 diabetes. Unfortunately, it’s a condition with warning signs that can easily be overlooked, and patients can become critically ill very quickly, especially in an otherwise healthy child with no family history.

An Unexpected Diagnosis
That was the case for eight-year-old Aron Vandeven of Bonne Terre, Mo. His type 1 diabetes diagnosis came out of nowhere. In fact, he wasn’t diagnosed until his condition rapidly declined into a life-threatening situation known as diabetic ketoacidosis (DKA).

“Aron has always been a healthy, happy little boy, with plenty of energy, a hearty appetite, and normal sleeping habits,” said Donna Vandeven, Aron’s mom. “I never saw any signs of type 1 diabetes until one week before everything fell apart.”

That’s because the symptoms of type 1 diabetes in children usually develop quickly and seemingly out of nowhere. Common symptoms may include:

With Aron, his mom noticed some of these symptoms just before Halloween in 2020. The Vandeven family – including Aron’s four siblings, his mom, and dad – was looking forward to having an at-home celebration, including bobbing for apples, games in the backyard, and lots of Halloween-themed treats. With the COVID-19 pandemic, the family wanted to play it safe by staying home instead of trick-or-treating. The whole family enjoyed the Halloween celebration – except for Aron.

“My kids have always loved Halloween treats and celebrations,” said Vandeven. “But, this year, Aron didn’t want any part of it – not the cupcakes, punch, or candy. He looked really tired and didn’t have an appetite. He also seemed particularly thirsty. I figured he was just going through a growth spurt.”

This continued for the next several days, prompting Vandeven to call her pediatrician’s office at Parkland Health Center. She was hesitant to bring him in due to COVID-19, but she was hoping for some reassurance. Aron didn’t have a fever, but he wasn’t acting like himself either. After consulting with one of the nurses, Vandeven thought it might be a virus and decided to give it more time to see if Aron’s condition improved.

Facing Diabetic Shock
“One night, I went to check on Aron, and I couldn’t wake him. When he finally got up, he could hardly stand. He had no strength and was falling over,” recalled Vandeven. “I tried to get him to eat, but he threw up. At that point, I knew something had changed, so I told my husband, Brian, we had to take him to the doctor.”

Vandeven and her husband decided to take him to their pediatrician’s office. During the short drive to Parkland Health Center, Aron couldn’t stay awake. Vandeven had to carry him into the office, where he was quickly taken back to be evaluated. The pediatric team assessed Aron’s vitals as he continued to sleep on the table.

“Dr. Srivastava was the first doctor who saw Aron. He said he thought he was experiencing diabetic shock and on the brink of a coma,” said Vandeven. “That seemed so crazy to me, because Aron didn’t have diabetes, but I trusted him and said do whatever they have to do. I knew we were in good hands.”

Dr. Piyush Srivastava is a pediatrician in the same practice as Aron’s pediatrician, Dr. Clauss, and was seeing patients in the clinic that day.

Vandeven figured Aron would be transferred to St. Louis Children’s Hospital (SLCH) for further treatment. When she turned around to go alert her husband, she was overwhelmed to see eight medical staff members surrounding Aron and bringing a stretcher. Vandeven started to break down in tears.

“That’s when Aron’s pediatrician, Dr. Clauss, walked in…just as I was falling apart,” said Vandeven. “She just hugged me. I knew then how serious his condition had become.”

Dr. Clauss has seen cases of type 1 diabetes quickly escalate into diabetic ketoacidosis (DKA). When she saw Aron, she knew how serious it was.

“Aron is usually a spunky, funny, chatty kid. When I entered the room that day, I saw him lying on the exam table with his eyes closed. He looked pale and very sick. He was talking a little, but when I turned around after talking to mom for a minute, he was even more lethargic, requiring fairly aggressive stimulation to get him to respond,” recalled Dr. Clauss. “I credit Dr. Srivastava for quickly assessing the situation. He immediately recognized that Aron was critically ill with what looked like DKA; activated the rapid response team and me; and then accompanied Aron and Donna down to the emergency room.”

Advanced Care at St. Louis Children’s Hospital
In PHC’s ER, the team drew Aron’s blood, which indicated his blood sugar was off the charts at well over 600 mg/dl (normal blood glucose level for children is between 60 and 110 mg/dl). He was then prepped for transfer to SLCH. Vandeven assumed he would be taken via ambulance and that she would ride along with him. But the ER team informed her that he would have to be taken via helicopter.

“That’s when I really lost it,” said Vandeven. “I sat and watched the helicopter fly away, which was the most helpless feeling. I just wanted to be with him.”

Vandeven, her husband, and their four other children drove 75 miles from PHC to SLCH. Although she knew Aron was in good hands, Vandeven was dealing with the uncertainty and anxiety about his condition. She just wanted to see her son and know that he was going to be okay.

With the COVID-19 protocols, Vandeven’s husband and children couldn’t visit Aron. So, they made the trek home, while Vandeven stayed behind with Aron. When she got back to see him, he was still asleep and hooked up to an IV of insulin. His vitals were encouraging, but the medical team informed Vandeven that Aron was very sick and had a long way to go. He underwent more testing, including a CT scan to check for any brain swelling, which is a complication of DKA.

“The doctors were worried that he seemed confused, so they wanted to check for any signs of diminished mental capacity,” said Vandeven. “Thankfully, the CT scan came back clear, which was a huge relief.”

Getting Answers and Support
Once his blood sugar and sodium levels were stable, Aron was transferred to the ICU, where he would spend the next two nights. The staff continued monitoring him and running a battery of tests. Ultimately, Aron was diagnosed with type 1 diabetes. DKA was a side effect of the diabetes going undiagnosed.

“At the time, the type 1 diabetes diagnosis felt like a death sentence. This wasn’t a virus that would simply go away with time,” said Vandeven. “I was grateful to finally have some answers, but also really nervous about what this would mean for his future. And since no one in our family has ever had diabetes, this was really unfamiliar territory.”

Although Vandeven grieved for her son – stepping away periodically for a good cry, so he wouldn’t see her – she also wasted no time getting to work. She spent the next two days reading everything the doctors and nurses gave her about type 1 diabetes and what would be required to help keep Aron’s blood sugars under control – including finger sticks, insulin shots, and counting carbohydrates.

“The diagnosis of type 1 diabetes in children can be overwhelming, especially in the beginning,” said Dr. Clauss. “I wanted Donna to know that she and Aron had support. Today’s medicine has made some tremendous strides in blood sugar monitoring and insulin delivery, which means better quality of life and childhood for kids like Aron.”

Adjusting to a New Normal and Hope for a Healthy Future
Once Aron was discharged home, Vandeven worked to educate her entire family about his condition and the care he would need. This meant a change in their overall diet and lifestyle – no more juices, soda or sweets without really understanding what was in it. She was initially worried about how they would handle this transition.

“This became our new normal, and everyone handled it with such ease. I’m so proud of all of my kids,” said Vandeven. “And my Aron has been so brave. We’ve always called him ‘The Bravest Aron,’ based on the many fairy tales and stories we like to read with knights and dragons, but that nickname is now even more fitting since he was diagnosed. He handles the finger sticks and insulin shots so well, never complaining. Better yet, he’s back to being our happy little boy.”

Vandeven has had follow-up appointments with Aron’s diabetes nurses and endocrinologist at SLCH, as well as Dr. Clauss. She’s truly grateful for the support and resources she’s received from the entire medical team at both hospitals. That’s one of the reasons they chose PHC – the reassurance of the BJC connection with SLCH.

For Dr. Clauss, she’s just happy to see Aron doing so well today. “At his most recent checkup, Aron looked great! He was back to his silly, talkative self. He has been checking his blood sugar several times a day, counting his carbs, and taking his insulin shots like he should,” she said.

Looking back now, the entire experience was certainly jarring for Vandeven, but she feels fortunate to be on the other side of it, watching her son thrive in his new normal. She is also working on giving herself some grace.

“Aron’s type 1 diabetes is something that had been going on for months, but we had no idea. Kids walk a line, and then one day they fall off. I don’t know how long he walked that line, but he finally fell off,” said Vandeven. “This was a good reminder to listen to your gut when it comes to your kids. I wish I would’ve gotten him checked out sooner, but I was too scared to leave the safety of our bubble during the pandemic. Next time, I won’t wait.”

Parkland Health Center’s physicians, including Dr. Clauss and Dr. Srivastava, work closely with specialists at St. Louis Children's Hospital in managing many diabetic patients, including type 1 and type 2, providing the support and resources families need to navigate this condition. For more information about type 1 diabetes, talk to your doctor or visit jdrf.org. 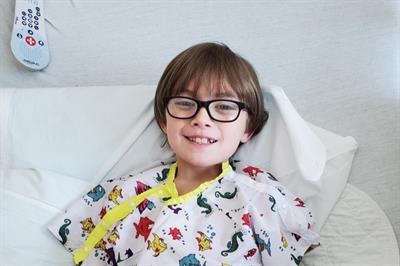