September 14, 2020
Press ReleaseCOVID-19
Article via The Daily Journal Online (Friday, September 11, 2020) - The St. Francois County Health Center Board of Trustees plans to meet on Tuesday at 4 p.m. at the Centene Center to vote on a possible mask mandate.
The meeting will not be live-streamed this time, but they have moved the meeting to a larger venue so more people can attend. Health Center Director, Amber Elliott, said there will be a public comment period.
“I think it's always important to hear public comments on any public policy that is being made,” Elliott said. “Masks are evidenced base. There's no disputing that. That's not the question for the health center or the Board of Health. The question is, ‘should it be mandated?’ and that's for the Board of Health to make a vote on.”

The board does have the authority to create health ordinances, Elliott said. “It does not have to be approved by the county commission,” she added. “I think ideally, it would be at least supported by the county commission.”
If the board does vote in favor of a mandate, it would be in place until the Oct. 22 meeting and would then be reevaluated at the meeting.
They do plan to do public surveillance to see if the mandate is effective if it is put into place.
“The public is divided on this issue,” Elliott explained. “I think the concern is, ‘will a mandate be enough to get people to truly wear the masks or will we continue to be split and not really have a good community effort towards universal masking or majority of the population masking in public places?’”
Another thing for the board to consider, she said, is how the mandate will be enforced. Ultimately, it’s up to the health center to enforce it, she said, but they aren’t law enforcement. And sometimes law enforcement officers are hesitant to get involved.
“We've had a lot of some law enforcement municipalities reach out to us and say that they do not support it and would not enforce it,” Elliott added.
A draft of the policy does include medical and mental health exemptions. The draft and an agenda for the meeting can be found on the health center’s website at http://sfchc.org/covid-19-updates/. 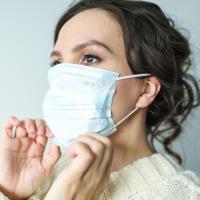