How One Patient is Choosing Gratitude, Humor, and Hope to Fight this Battle 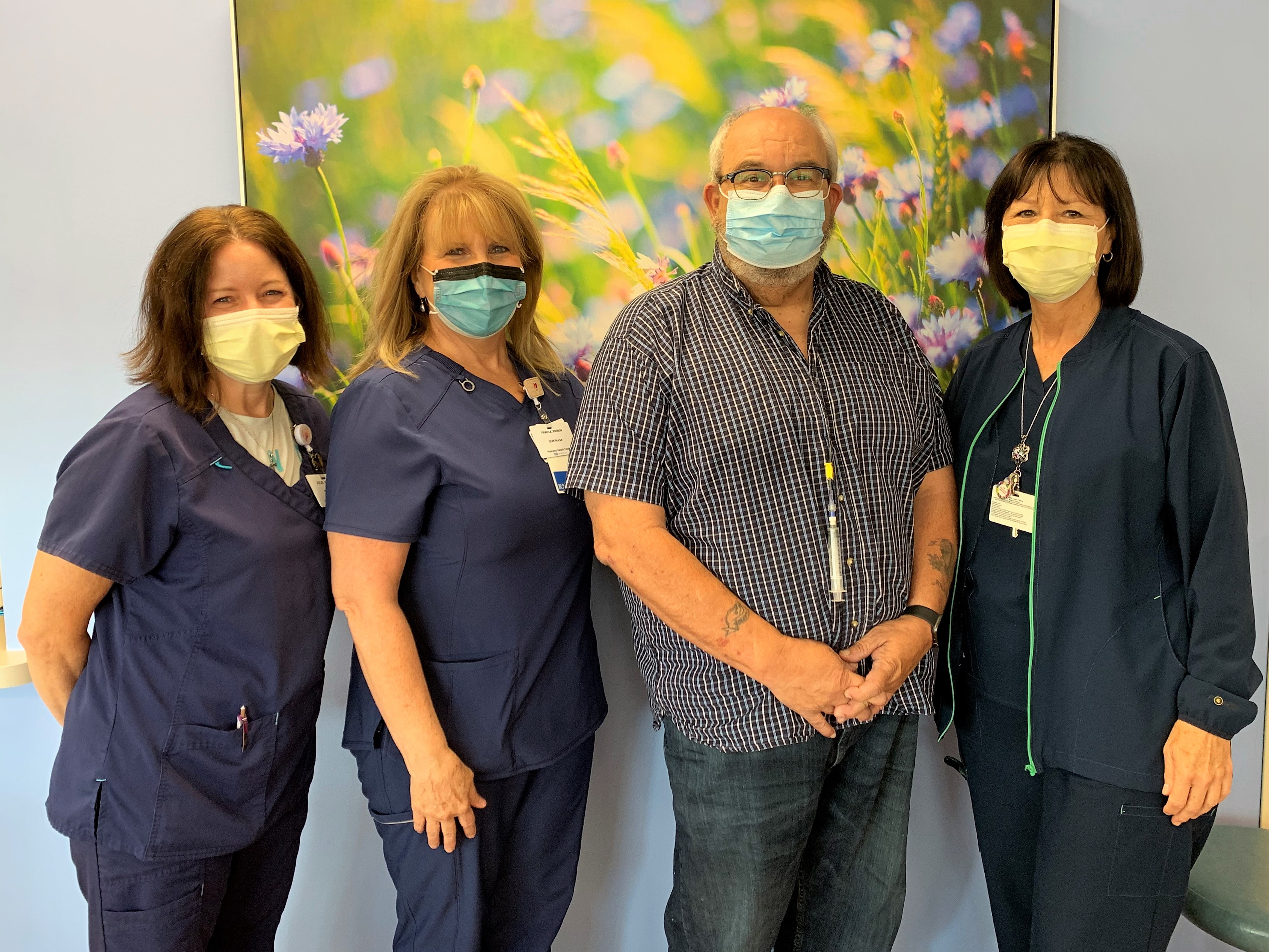 (FARMINGTON, MO – September 7, 2022) – You’ve likely heard the phrase ‘glass half-full or glass half-empty,’ which is customarily used to assess one’s general outlook as either optimistic or pessimistic. Richard ‘Rick’ Ferrell, 64, of Herculaneum, Mo., falls into the ‘glass half-full’ category. His daily reflections and positive outlook on life could sway even the most cynical person.

What’s even more incredible is that Ferrell emits this zest for life all while battling terminal colon cancer. Although most people would struggle with such a devastating diagnosis, he’s come to find it as somewhat of a blessing.

“Who would’ve thought one year ago I’d be in this life-changing situation,” said Ferrell. “But, if I had to choose one negative thing about it, I don’t think I could, especially when I think about the amazing people I’ve encountered over the last several months.”

Ferrell is specifically referring to the staff at Parkland Health Center’s Cancer and Infusion Center, which has almost become his home away from home. He makes the 45-mile drive every two weeks and looks forward to seeing his treatment team, including Pam, Mindy, Robin, John, and Barry, to name a few.

“They are all amazing people,” said Ferrell. “From the receptionist, who’s friendly and jokes with me every time I walk through the door, to Barry, who checks on me during my chemo treatment to see if I need a snack. He even keeps a Diet Pepsi out at room temperature for me because he knows my hands get cold from the chemo medication. They are all so incredibly kind, comforting, and friendly, which makes a terrible thing like cancer not seem so terrible after all.”

An Unexpected, Life-Changing Diagnosis
Ferrell’s cancer journey first began in December 2021, when he started struggling to eat. After being evaluated at Parkland Health Center, he underwent surgery, where eight inches of his colon were removed. That’s when Ferrell’s medical team determined he had an aggressive form of colon cancer. He was then referred to Paul T. Mehan, MD, a medical oncologist and hematologist at Parkland Health Center and Missouri Baptist Medical Center, who is also the medical director of oncology at Missouri Baptist Cancer Center.

“Rick was diagnosed with metastatic colon cancer shortly after he developed symptoms,” said Dr. Mehan. “Unfortunately, it’s common to present with advanced cancer with only minimal symptoms, and occasionally, as was the case with Rick, despite having had an up-to-date screening colonoscopy.”

Ferrell was understandably shocked by the diagnosis. This was unchartered territory for him. Other than having his tonsils removed as a child, he never had to deal with a major health event. That’s why he was grateful to have Dr. Mehan and his team there every step of the way.

“Giving someone a cancer diagnosis is never easy. I commend Dr. Mehan for delivering the news to me in such a straightforward, compassionate manner,” said Ferrell. “I went from being healthy to finding out I only have three years to live. Then again, it’s up to God when I go, and I’m going to keep fighting while I’m still here.”

Dr. Mehan and the cancer team wasted no time in mapping out Farrell’s treatment regimen. “Rick demonstrated impressive logic and patience as he came to understand his diagnosis and prepare for treatment. He carefully considered his family and his faith as he chose to proceed with aggressive chemotherapy and targeted biologic therapy for his cancer,” said Dr. Mehan.

Supportive and Comforting Cancer Care
Before treatment started, one of Dr. Mehan’s nurses took Ferrell and his wife, Julie, over to the Infusion Center to walk them through what to expect with each chemo treatment and how to care for the pump that Ferrell would continue using at home following each treatment. The nurse even allowed Ferrell and his wife to do a video recording, showing them how to remove the pump, so they knew exactly what she needed to do.

“Our goal is to make sure that our patients never feel alone in their care,” said John Spurgin, manager of Parkland’s Cancer and Infusion Center. “We understand the importance of making patients comfortable and knowledgeable about their care plan. Patient education and interaction are important services we provide. Rick is a wonderful example of how impactful that relationship can be. It really makes a difference in the overall care journey.”

Farrell elected to undergo his treatment at Parkland’s Cancer and Infusion Center so he could avoid long travel times and traffic. He also really enjoyed the friendly hospital staff, who took exceptional care of him after his surgeries.

Since March 2022, Ferrell has been undergoing bi-weekly chemo infusion treatments at the Infusion Center. He looks forward to those four-hour sessions, where he gets to catch up with his treatment team and other patients, all while sharing some laughs amidst this unexpected journey with cancer. He’s also been lucky to experience very minimal side effects from chemo, which has allowed him to keep living his life.

When the Little Things Make a Big Difference
“Treatment has surely been difficult at times for Rick, but good luck getting him to admit it!  His positivity has been uplifting and inspirational, and fortunately, his treatment has been effective,” said Dr. Mehan. “We’re all thrilled that Rick, an avid guitar player, was able to enjoy a blues concert in Nashville with his son during his course of therapy. We’re also grateful that he has met his goal of continuing to work at his elementary school where he is surely beloved. Our team looks forward to continuing to work together to design a plan that we hope will prolong Rick’s life while maintaining his quality of life.”

Ferrell has been so touched by every single person he’s encountered at Parkland Health Center along with the kind gestures extended to him, such as a gas card from one of his caseworkers, to the intensive care unit nurse, who called Julie in the middle of the night to give her updates on how Ferrell was doing after his surgery. Ferrell has found great comfort in the support and care he’s received throughout this cancer journey.

“People are amazed that I drive to Farmington for my treatment. But you know what? I’d drive 10 times as far just to be treated by Dr. Mehan and the team at Parkland Health Center. They always go above and beyond, and I know their care is making a difference in my healing and quality of life,” said Ferrell. “To be in such a traumatic situation, it’s turned out so much better and different than I ever expected. I have also learned a really important lesson: God may place you in the midst of a negative to make you happy.”
For more information about Parkland Health Center’s Cancer Center and Infusion Center, please call 573-701-7273. 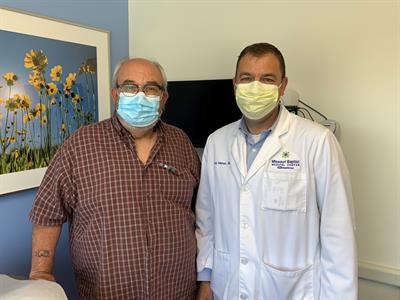