State Reps. Rick Francis, Mike Henderson, and Dale Wright are encouraging their constituents to make plans to participate in a legislative hearing to discuss the boundaries for Missouri’s 8th Congressional District. The House Special Committee on Redistricting will hold the hearing on Tuesday, March 30 at 8 a.m. in Hearing Room 6 in the State Capitol Building.

The committee will spend the next several months working on the once-a-decade process that will revise boundary lines based on population shifts revealed in the latest Census data. The data was originally planned for release in April, but now will not be available until the end of September.

The committee has begun the process of holding hearings for public input in each of Missouri’s congressional districts. The committee will accept in-person and written testimonies from members of the public. Reps. Francis, Henderson, and Wright said it’s important for residents in their district to make their voices heard on this important process that has the potential to reshape the 8th Congressional District.

Individuals who wish to provide information to the committee but cannot make the trip to Jefferson City are able to submit their testimony online at the following link: https://house.mo.gov/WitnessForm/Default.aspx?noticeid=597 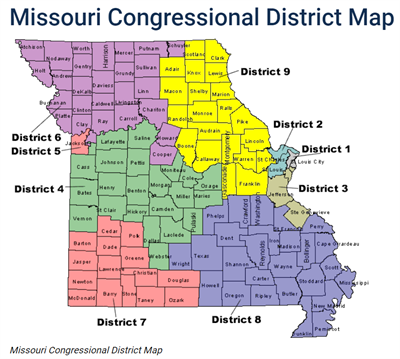